Not only quenching, also process like heat treatment of components are done in industries which manufacture gears as shown in Fig: 1 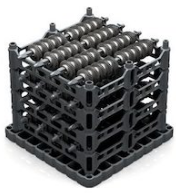 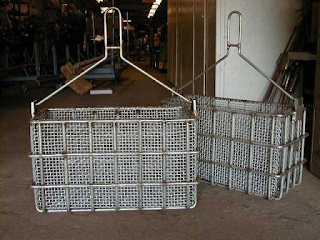 Industries uses this process for strengthening the product, we uses different heat treatment basket for small components for batch process as shown in Fig: 2.

Different designs of baskets are used for different industry, when the components are heat treated then the baskets are also heated, upon repeated heating and cooling of the basket the life of the basket will decrease due to that there will be more scrap or rework on basket, which is an loss to the company, also there can be chance of shape change due to the internal thermal stress produced in the basket.

So to overcome these difficulties SolidWorks 2020, introduced a module Thermal Loads for Beams, where temperature can be given as an input to the beam or to joint, depending on the type of input like heat flux, heat power etc., can be defined accordingly to the beam or joints as in the Fig: 3.

We design a basket using weldments in Solidworks2020 as shown Fig: 4 with material properties are aluminum (1060 alloy) as shown in Fig: 5 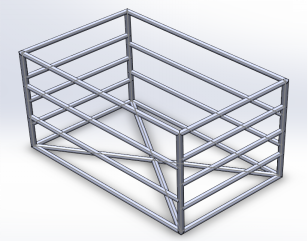 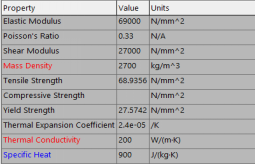 Using these design and material properties, we had run an Thermal simulation, in the real life scenario the basket is kept in an heating chamber for heat treatment, so to provide the actual condition, radiation effect was given to the beam, the image shown in Fig: 6, displays how the radiation effect. 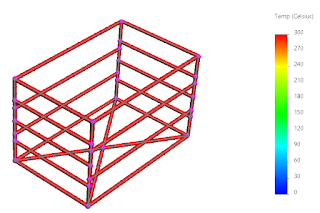 Due to the thermal radiation there will be an internal stress produced inside the beam, these stress are called internal thermal stress, due to these there will be an expansion in the members. To check displacement value and location a static study was done with giving the base as fixed and providing thermal results as the input data, by running the study the displacement result is as shown Fig: 7. 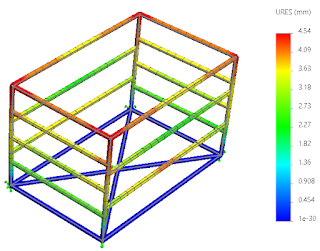 There are more internal stress produced at top corner as shown in Fig: 7 and the displacement is 4.54mm which is actually small, which indicates the members will not fail due to the thermal stress.

By using SolidWorks 2020 we found the thermal internal stress produced on the beams, so that there will not be more rework on the basket to the company, as the elongation is small with in the temperature range, these can be found out in prier using SolidWorks Simulation.

THANK YOU FOR READING!